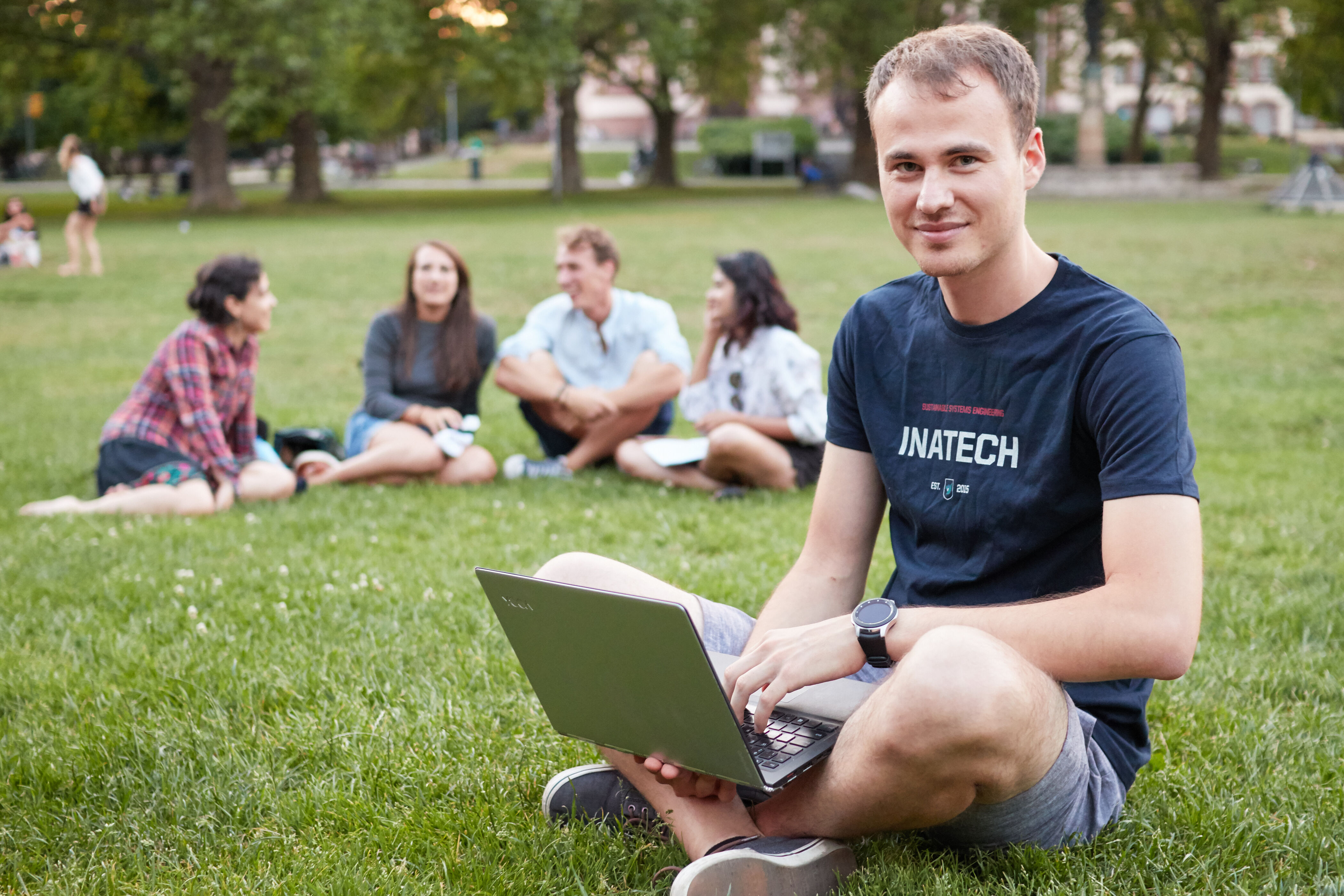 From Oil to Sustainable Systems Engineering: How a Young Researcher Made the "Switch"

Nick Harder is a PhD Student who studied Petroleum Engineering in his bachelor. Now he is working on Grid Integration at INATECH at the University of Freiburg.

From Oil to Sustainable Systems Engineering: How a Young Researcher Made the "Switch"

Nick Harder is a PhD Student who studied Petroleum Engineering in his bachelor. Now he is working on Grid Integration at INATECH at the University of Freiburg.

Our audience contact & honest marketing director Carolina Garcia had a friendly chat with Nick Harder. They talked about his dream project, what kind of news he follows or what he does to wind down as a busy PhD student.

Carolina: Which area are you most passionate about renewable energy?

Nick: At the beginning of my master's, I was working with solar cells, and it was fascinating for me to be using the tools and work with these. I come from a petroleum background where we drilled and extracted fossil fuel to produce energy. But when working with the solar cells, making something on a microscopic level and putting it under the sun to see it working to create power was fascinating. After solar cells, I was interested in the operation and distribution of the produced energy, so I shifted towards grid integration. Working as a PhD student in this area, I learned it is not that easy to integrate a large share of renewable energy into the grid. The best part is 10-15 years ago, some scientists believed that renewable energy share in the grid could not be more than 10% percent. But in February 2020, the share of renewable energy in the German grid was around 70% percent. Mostly it was wind, but the amount is fascinating. This is possible thanks to every scientist who worked to contribute to the field.

I am looking forward to seeing how this will also improve more in the future. For the time being in Germany, we have arrived at a significant point in terms of renewable energy. However, for other countries, there is still more work to be done. I believe Germany can set an example for the transition towards a renewable future.

N: Uhm, I believe we will see more and more time points with 100% renewables share in the grid. But the yearly average would be below that since 100% renewable share is economically not feasible with current technology. But the technology changes, many scientists work on the problem, and it might be the case in the future.

C: This is a question I like to ask to people who work on renewable energy: So, if you had all the resources available to you, tools, funding, people etc., what would be your dream project?

N: That is a difficult question…But my project would probably be to extend and expand the European grid to include the African continent. Even now, the European grid is such a vast grid – some even say it is the biggest man made project. For instance, when electricity produced in Norway is being used in Italy, this requires crossing several countries. If we could add Africa to the grid and install large scale solar power plants in the African deserts, both continents would benefit. Europe would gain access to more renewable resources. African population would gain access to the electrical grid and affordable electricity since around 500 million people in Africa live without electricity.

C: After completing your master studies in Germany and beginning to PhD here, do you feel more at home?

N: I think I do. I have lovely colleagues. I like my job and Germany’s involvement in environmental issues.

C: What is the news that catch your attention nowadays- on radio, TV, newspapers, or the Internet?

N: Now, a lot is happening in the world. But from good things, I am following news about AI because I am working on implementing AI in energy systems. It is fascinating what artificial intelligence can do. Everything we have achieved in the grid integration is thanks to complex calculations and optimizations designed by engineers and scientists. And looking at AI's potential opens excellent opportunities for future work and improvements in the energy field.

C: Do you have any concerns about the uses of AI? Like some people say “machines will take our jobs” kind of worries?

N: We should be careful about some issues since humans create these algorithms, and the machines learn from humans. So, teams behind these works should be as diverse as possible to avoid discrimination and unwanted results. AI will take over some of the jobs, but it will create additional new jobs for people. The economy evolves according to that. For instance, since the oil industry is losing popularity, people like me switch to renewable energy industries or other industries. When you learn a new skill and adapt to the world, you can always find something else.

C: What are your hobbies when you are not doing research work on AI or energy?

N: *laughs* My hobbies are also related to robots and AI. But apart from that, it is hiking and skiing; it is nice to go into nature. But when I am not in the mood to go outside or come back exhausted from work, I sit and build a Lego robot at home. Nowadays, even small children play with robotic toys, we adults should also follow the trend.

C: If you have not changed your career, where do you think you would be?

N: To be honest, I do not know. Even a year before I finished my bachelor's in Oil & Gas Engineering, I was already thinking of doing something else. So, I did not think about which direction my career could go in that field. In one of my last lectures during my bachelor's, we had a guest speaker. I believe he was from England. Even he told us that people in the petroleum industry should start looking for other job options. I already knew I made the right decision to switch.

C: Once again, what are you working on exactly – if it is not confidential, of course?

N: No, it is not confidential. We are trying to implement AI in electricity markets; we look at how power plants act on the market, formulate their bids, etc. For now, renewables have the highest priority, but they will have to compete in the future. And for this, the future electricity market might change. With the help of AI, we might find better policies and market designs for future energy systems.

C: Thank you, for your time Nick. You have provided a great glimpse to your work, and your transition from oil to renewables is an excellent example for many, I believe.

Note: This interview is transcribed and edited by SEE Team member Merve Özcaner.