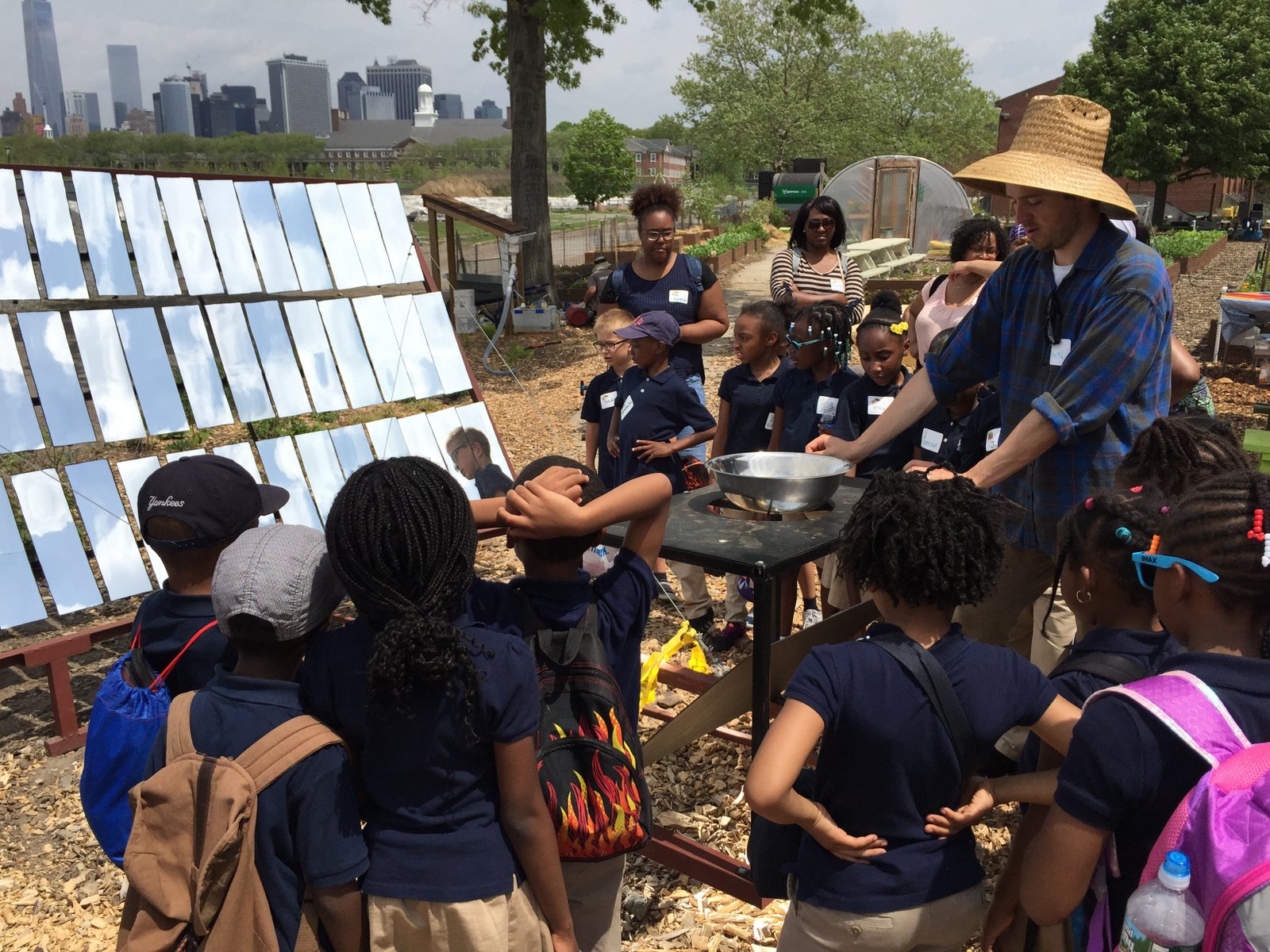 Can Solar Thermal Energy be a Game-Changer? — Part 2

In the second article of the series, Mr Wissenz dwells on how solar thermal energy brings many mitigation benefits as well as education opportunities.

Can Solar Thermal Energy be a Game-Changer? — Part 2

In the second article of the series, Mr Wissenz dwells on how solar thermal energy brings many mitigation benefits as well as education opportunities.

Displacing a large number of thermal energy industries to rural areas would significantly reduce embodied carbon emissions in exports to rich countries. A large component of global production today is based on thermal energy supplied by coal, either directly or through electricity when it is cheaper to burn the coal close to mining and transport the energy with electricity lines rather than trains. This fundamental component of global emissions today can be shifted to solar thermal technological ecosystems that can emerge in low-income rural regions.

With a cheaper source of thermal energy available, a balance can be created between using solar thermal devices and collecting and burning biomass. If biomass becomes farther away to manage or price increases, it motivates reorganizing life and production to use a higher percentage of solar thermal energy (i.e.wait for the sun to be available for the tasks in question). As solar thermal energy becomes cheaper, the distance/price threshold of biomass fuel changes proportionally. Furthermore, what biomass is consumed can be converted to charcoal using excess solar thermal energy when the sun is shining. This is a way to store extra solar energy in the added value to the charcoal making process.

Currently, charcoal is often made in very inefficient “smothered mounds”. The highest cost-component of supplying a city with biomass fuel is the transportation of the power from source points to sale points. This bottleneck of capital and fuel costs for trucks motivates transporting as much fuel value as possible with each truck trip. Since charcoal has higher energy density than the source wood, fuel suppliers have a high motivation to transport only charcoal, converting the wood source to charcoal at the source points. However, since all charcoal suppliers can increase the price as resources are reduced, there is no fundamental motivation to convert the wood to charcoal in an efficient way. So, even more, wood is consumed than needed.

The availability of cheap solar thermal energy pressures fuel costs down, reforestation can re-encroach where people are living. With available biomass and solar energy, the conversion of biomass to charcoal for the evening and cloudy periods becomes much more efficient. Furthermore, with solar thermal charcoal conversion, the oils, esters, and other evaporate of the biomass can be condensed and, depending on the plant, can have significant value, such as resins.

As this solar thermal productive system becomes more efficient, easier to use, at some point, it becomes competitive as well in higher and higher income regions for the supply of most thermal energy-based goods. Solar energy is available in so many places at little cost, but transportation always has a price. Once the ease of deploying solar thermal technology decreases below a certain threshold, it is cheaper to start to produce goods locally instead of transporting/importing it into the region.

This is in contrast to fossil-based production, where is it nearly always more efficient to produce at central fossil-complex locations and transport, using fossil energy, end goods to farther away markets. Cheap enough solar thermal energy would reverse the principle that centralization is a more effective mode of production for a wide range of good. (The reason why this is a progressive process of becoming cost-effective in wealthier regions is that labour automation is required as well as sufficient synergy of a wide range of productive applications. Whereas, these factors are not necessary in the roughly two-thirds of the world that are low-income regions where labour costs are low, and so maintenance is not a massive barrier, and furthermore, some smaller-scale farmers can easily add value to products they already grow.)

Increase in income is one of the key factors that can radically increase resilience to disaster, whether a bad growing season, prolonged drought or a massive storm. With a solar thermal energy device with very short payback that is easy to maintain, people can increase their income even if displacement is an eventual certainty. Low-capital solar thermal devices that have a high ROI can furthermore be simply rebuilt wherever people are displaced to by climate or other events. So, the skill keeps its value after a possible displacement.

Since solar thermal devices are by nature decentralized and do not require a grid for efficient use, (thermal energy cannot be transported considerable distances) solarthermal devices are mostly immune to the grid, and other regional infrastructure collapses. This is particularly relevant in low-income regions where grids are already volatile, vulnerable to disruption and challenging to rebuild post-disaster. Still, it is also applicable in the higher-income areas.

Nearly all regions are vulnerable to grid disruptions of electricity and other fuels. So the pre-positioning of low-cost and high-power solar thermal devices can significantly help in natural disasters in many high-income regions as well.

Currently, refugee camps are often placed on marginal land that is already vulnerable to desertification, and there is no way to stop people from collecting biomass if it is the only productive activity available. In parallel, NGOs must truck in large amounts of fuel in various forms to run the camps and settlements. This situation is ideal for the benefits of low-cost, high temperature and locally built solar thermal devices, as building and maintaining the concentrators also provides employment and meaning to refugees, along with income and skills-building benefits.

In general, renewable energy is unlike seasonal agriculture or trading. Even with the short payback period of our product, renewable energy is a business where the investment in capital and learning is upfront, and the value is generated over time. This requires sufficient business skills to plan and operate on the time frame necessary; otherwise, no net worth is generated. Where these skills are lacking, education and entrepreneur incubation programs are critical for the deployment of the technology.

Although using the Lytefire technology is intuitive and training on basic gestures and maintenance is relatively short, a rich educational context is required to fully motivate and empower new solar entrepreneurs. Low-cost, locally-built, and high-temperature solar concentrators are also ideal for the education setting. Students can help build and/or assemble the technology and help operate and maintain it.

Furthermore, there is a lot of engineering, physics and other principles embodied in the technology, and its use provides many teaching opportunities for diverse subject matters. Social and environmental problems can be taught with a “solutions attached” approach, which is more engaging. Schools in low-income rural areas often cook meals and require purchasing fuel for this activity. Therefore, there is also a direct return on investment from the use of technology.

Furthermore, in low-income regions, many of the applications of the technology may be unfamiliar and cannot be learned in simple training. For instance, many of the students that participated in our baking course had never baked before, because ovens are not a common thing in their region. In low-income regions, a rich and engaging education training must accompany the technology, and we have developed and already started this in Uganda within the context of the Smartup Factory program with Plan International.

Open Source: this is where you’re needed

Since the technology can be built simultaneously all over the world and furthermore every new thermal application adds value to the existing ecosystem, the strategy with the maximum impact potential is to high-quality open-source engineering and educational material.

Reaching a high ROI for solar thermal involves optimizing many factors. Although once a design is developed, it can be copied easily, creating a new optimized design is not trivial but requires software algorithms to simulate the physics and economics of the reflector, application, and operational constraints. This is further complicated by environmental, social and economic conditions changing from place to place, not to mention different materials and standard tooling and fabrication methods.

We have accumulated a significant amount of software, prototyping and field experience that is not easy to recreate. The best starting point for any innovator who wants to develop a new application or to re-optimize an existing application and configuration for different conditions is the full and complete documentation of the knowledge we have now. With fully open sourcing the knowledge, thousands of innovators can be directly empowered as well as educators and entrepreneurs. This collective potential completely dwarfs the capabilities of a single organization.

Given the cost of deploying the Lytefire technology relative the potential benefits, it is high leverage, high growth-rate, impact potential on mitigation, adaptation and sustainable income generation in general. We are willing to cooperate with financial and educational partners to launch the open-source program.

Disclaimer: This article is edited by the SEE team for convenience.